An Award Winning Project by the Totally Locally team.

The Valley of Lights was a project designed specifically to improve the Local Economy of the Calderdale Upper Valley area after the terrible floods of the summer of 2012. Totally Locally was commissioned by Calderdale Council to create something special that would impact the businesses in the area & give the people of the towns a much needed boost, while re-connecting them with the local shops. The idea we came up with seemed a bit crazy, but boy did it work! And we only had 8 weeks to deliver it!

Both Nigel & myself agree that this was the proudest moment of our working lives. And also the most knackering! But…. it was just brilliant! 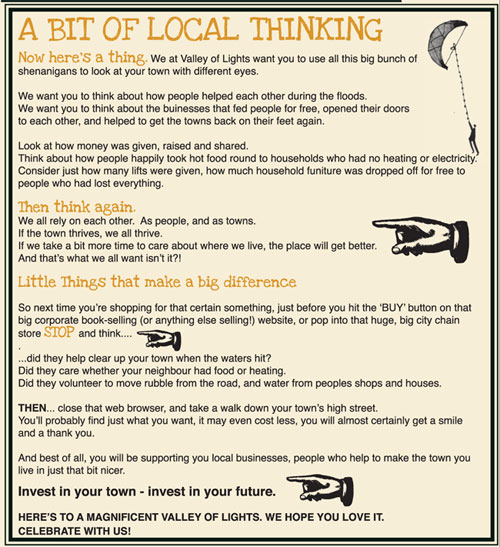 An estimated 12,500 people turned out to support their communities, with a huge, fire, music & performance spectacular. We held hyper local markets each night with stalls by people from the immediate area, especially those who’s businesses were affected during the flood. We created a big campaign for the local shops and businesses using the Totally Locally kits – £5 messages, Fiver Fests, Town Maps. An incredible parade was put on by The Handmade Parade people.

It had a huge impact on the shops, and towns, with many reporting one of their best nights of the year. Also reports of an upswing in trade in the following weeks leading up to Christmas. There were a lot of tears, lots of dancing, singing and 3 nights of pure emotion and many, many tears.

There was a “Night Light Bike Ride‘ 200 bikes all lit up in fairy lights, riding through the night (in minus 6 degrees!) symbolically joining the three towns. Crowds cheered, & cyclists grinned!

The brief was to get the message out that the Valley and the towns were well & truly open for business, as there had been huge amounts of negative press saying that the area was devastated – so visitor numbers fell dramatically. 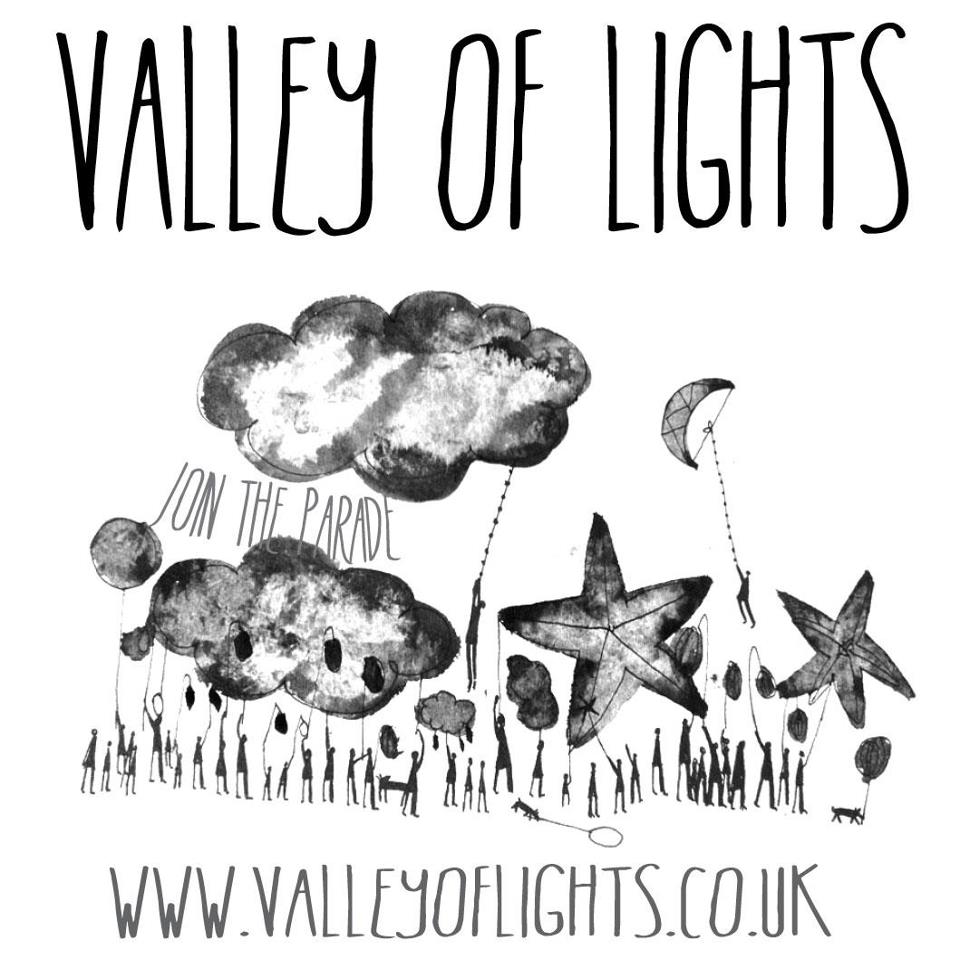 The Press coverage Valley of Lights received has been independently valued at £1.5 million!Many of the businesses reported big upturn in business, and lots said it had made a big difference to takings on the run up to Christmas. So it sort of worked really! Here’s what the BBC said>>

Every single performer, maker, supplier and partner (from printers & light suppliers to barrier hire & fire performer!)  was from the local valley area, meaning that every transaction or commission we made had a positive impact on the local community. Putting our money where our mouth is!

There has been huge calls for Valley of Lights to happen again,  but we decided this was a one-off special event, that could never be repeated. Which makes it even more special.

It really was THAT beautiful!

And the The Guardian ran a feature you can read here >>>>