One of the things we see with towns that go Totally Locally is a noticeable increase in pride in the town. This makes sense, we’re opening peoples eyes to the great things in their town, the wonderful shops and the impact that they can have by spending a little bit of their money each week with the independent businesses. We saw first hand how this happened in Leek during voting for the Telegraph’s High Street of The Year competition in 2013 (Leek was joint runner up by the way)

The competition was organised by the Daily Telegraph and simply involved people emailing them to tell them their favourite High Street and why – this is how we did it….

Pete Massera who lives in Leek spotted the competition in the Telegraph, took some details and shared it to the Totally Locally Leek Facebook page, saying he thought it would be a good idea.

So we did. And people started voting, but we didn’t know how many, how passionate they would be or if we were even in the running…. 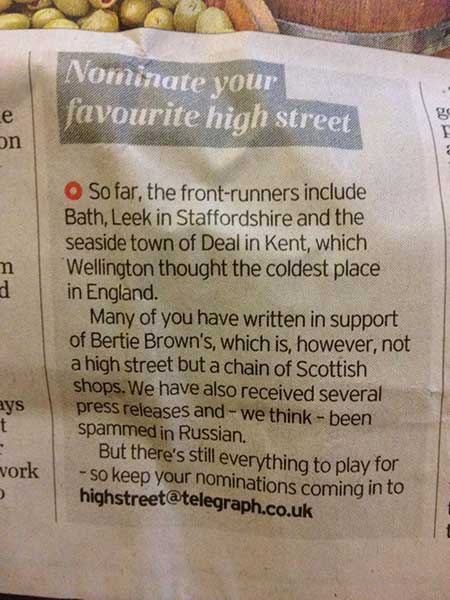 Then another chap from Leek, Chris Thompson, spotted a tiny piece in the Telegraph with an update – the front runners were Bath, Deal in Kent and Leek in Staffordshire. ‘Wow’ we thought, we’re in with a chance here. Being cautious types we thought it’s nice to have a mention but there will be other, higher profile towns who will claim the prize in the end. But we shared Chris’s photo of the article on Facebook and asked people to vote again. And they did, and they shared it – and we started to read the comments of how proud people were of Leek, and ex-pats saying how much they miss the town and wanted to move back, and visitors saying how lovely the town and people were – very humbling. But one thing that struck a chord was when people started saying things like ‘There’s no way I would have voted for Leek before, Totally Locally’s really opened my eyes’ or ‘I would never have walked around with an I Love Leek bag on my shoulder before now’. We were happy with that to be honest, people changing their habits and view of the town, after all, that’s what it’s all about.

The local paper, The Leek Post & Times, also picked up on the story and ran a short column piece encouraging people to vote for the town and were really positive.

And we heard no more, we didn’t know how it was going, had no contact from the Telegraph until late November when we heard we’d made it into the top 10 – whoop! And then the announcement early January that we were joint runners up with Ramsbottom (Deal in Kent were the winners) and another Totally Locally town Teddington made the top 10 as well.

So that was that we thought…..

Then we had a visit to Leek by Brandon Lewis MP, Minister of State (Communities and Local Government). He’d been to visit Mary Portas in Rotherham in the morning and came to Leek and other areas in the Staffordshire Moorlands in the afternoon. We had a tour of the town. Brandon was Chair of the High Street of The Year judging panel and he commented that the passion and love for Leek had really stood out to all of the judges and it was obvious that we’d had a really well planned and orchestrated campaign to get so many people to vote…. That’s when we confessed it wasn’t really planned at all, it was a social media push, a couple of photos and a piece in the paper but it was due to Totally Locally and the impact it has had on the town and the residents that they wanted to vote for Leek and in big numbers as well.

As a footnote when the result was announced a few naysayers asked if the judges had been to a different Leek?, they couldn’t see how it could possible be that good etc. (and these are people who live in the town) and they were soundly put down, with suggestions to move if they don’t like the town, which wouldn’t have happened before – and that’s a big change for little ol’ Leek.