It is all of the above, done in a Totally Locally way. The Sunday Supplement started in Leek in 2012 to stimulate Sunday trade in the town. Before we go too far into the hows and whys, a little background…..

Leek is a historic market town on the edge of the Peak District. Totally Locally started in Leek in 2011, largely in response to a new, big, out of town supermarket development. The town had a good mix of independent businesses and a friendly welcome but was missing a certain something. Like all towns it has had its ups and downs and was starting on an up again. Leek was the first town in England outside of Calderdale to go Totally Locally so it was a bit of an unknown thing as well – would it work in another town and would it cultivate the same ‘can do’ spirit.

The answer is ‘yes’ in bucketloads and Leek hasn’t looked back since – empty shop vacancy rates are around 5%, well below the national average and more famous, neighbouring towns, have started to ask what’s happened in Leek?, we want a bit of that. However we digress – you want to read about the Sunday Supplement idea….

So we have a nice, traditional market town, in  a great location, wonderful shops, cafes, pubs and a loyal customer base and more people becoming aware of the town but Sundays were deserted, a veritable tumbleweed day. There’s always talk of getting Sundays to work in towns (similarly late night opening as well) but this has to be balanced against businesses often being family run, there’s a home to go to, often children to look after. Add in the cost of employing staff whilst a new trading day or evening builds up and it can be expensive with little or no return in the early days.

There was a desire to explore developing Sundays in Leek but maybe not doing all of them –  start with one, make a day of it, attract trade and then, after some time, expand into more Sundays – and this is where the Sunday Supplement came from.

The key ingredients for a Sunday Supplement:

Really simple…..until we spoke to the local Council. We wanted to run the market through the streets, not in the traditional Market Place. Our thinking was logical – if there’s a market people will walk around the market, if it’s in the Market Place they may not go much further (remember this is a Sunday and people are used to everything being closed). We wanted stalls through the streets. If a shop is open we don’t put stalls in front, if a shops closed, then we put a stall outside, creating a brand new street scene mixing stalls and shops. But we didn’t have a license, it had never been done before, road closures, emergency access, council staff putting up stalls on a Sunday, yada, yada…..

So we went ahead anyway! A few shops and cafes opened and we invited some local makers (who sold their products in the local shops) to come along for the day, meet their customers, sell a few things, have a brew. Then we were told we couldn’t do that because it would be street trading – so we said OK, if you sell anything get the customer to come to the till and we’ll sort it out at the end of the day. One road closure form later, we were up and running – a handful of shops, a couple of cafes, a pub, some deckchairs in the streets and about 3 makers made up the very first Sunday Supplement (on the first Sunday of the month if you fancy a visit).

And people turned up, honestly we could have cried with relief – don’t get us wrong, it took a lot to get to that point and we nearly threw in the towel a few times, but we didn’t. And one of the reasons why was we knew we could, and should, be allowed to do this. If nothing else happened with Totally Locally in Leek it inspired us to do things and not moan that the Council hadn’t done it or should be doing and also realising we could do it if we wanted and a bit of red tape wouldn’t stop us.

After the first couple of Sunday Supplements we had a meeting with the Council, they’d seen how the Sunday Supplement was working and getting busy and thought it was a good idea. They found a way around the licensing, Sunday working and everything so we could have market stalls as well.

The next Sunday Supplement had 9 market stalls, a few more shops and cafes opened and we had increasing numbers of new and regular visitors, the 2nd market had 14 stalls and then we built up to 25+ for the busier winter season markets. The shops were having a good days trade, the traders loved the vibe and atmosphere on the market and we had visitors to Leek who hadn’t been before, or for a few years, often because they were working in the week and Sunday was their day off – all good.

Fast forward a couple of years and the market peaks at 60+ stalls, shops and cafes have busy days similar to a Saturday, a number of the stall holders supply local shops (and the shops don’t mind them being on the market once a month) and we’ve had 5 businesses who started out on the market who have gone on to open their own shops in town as well.  You see the Sunday Supplement is way more then ‘just a market’ – it is additional trade for the independent shops, visitors are discovering the town and spending in the town and returning, residents are having a regular day out who may not come in the week and it is an incubator for new business start ups – oh and we won an award from Towns Alive as well.

It’s taken three years to establish the market to the point it is at now, it isn’t a quick win and takes perseverance, a thick skin and a few helpers for the admin and more – but its all worth it. 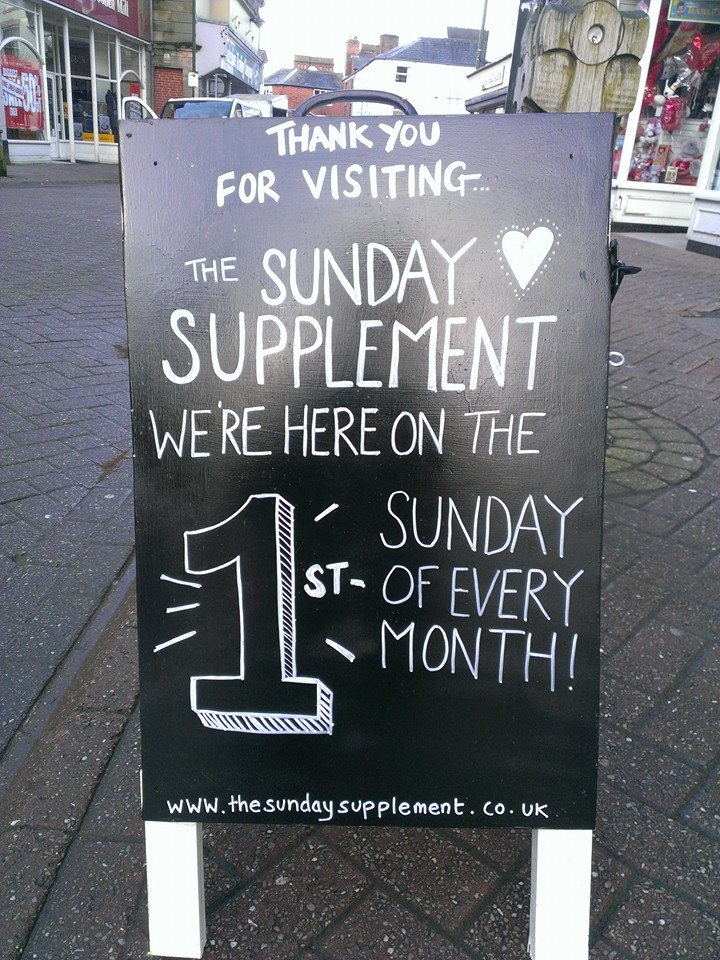