There are so many anti supermarket campaigns at the moment and it made me think. If the supermarket isn’t profitable shareholders would shut it down. They would leave, and the town would go back to how it was. The aisles would be empty, the staff would be twiddling their thumbs and no ready meals would be sold. It’s pure maths. If they have no profitable business they will close it and build one somewhere else.

Head office would probably throw loads of cash at advertising, put some offers on and do anything they could to get you there. But if no one went…… 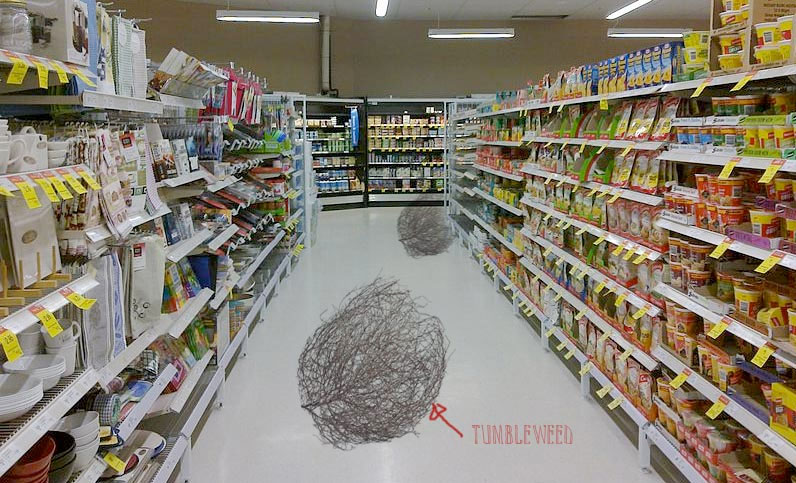 This came to my attention due to a town nearby us (Hebden Bridge) where there are two supermarkets proposed. the town is full of people who would say they will never use the supermarket. If that’s the case then they should let somebody like Sainsburys open and see how bad it would be for them. And they should protest too. They deserve and need that voice, and the big guys need to know that it’ not easy for them to push a community aside.

And isn’t there the case for not fighting the supermarket but educating people who live in the local area just what the impact of supporting local independent businesses is? A vibrant place where children can learn and get a Saturday job  in shops, more money floating around the local economy more jobs and generally a nicer town centre. Not a place that looks like everywhere else, and one that lets you feed back into the local economy on a vastly greater scale than if you used the supermarket with it’s often offshore shareholders, whenever you buy something.

So when you see a ‘save our shops, don’t allow a supermarket to be built as it will ruin our town and all our small shops will close‘ campaign you need to ask the question. Why would the small shops close? If people kept using them and didn’t use the supermarket  they wouldn’t close at all.

But that doesn’t let the independent businesses off the hook. If you’re convinced that people would use a supermarket instead if you then you’ve got to look at WHY they would use it.

The supermarkets go in  at low prices for a while  when a new store opens to get people hooked on using them. They up the prices later. They get people used to not buying stuff during the day because you can call  in the evening and get it then. They are clever. But also their research has told us of things like people shop mainly between six and seven at night.

They are also brutal. They don’t care about anyone. That includes local communities and other businesses. This isn’t wrong its just how big businesses work and  people get paid on results and profits.

But if the supermarket was to open in town and people just looked on it and said ‘no this is going to impact my community in a big way I won’t go’  it would close because its not making any profit.

So how about the town that ends up with the supermarket but nobody goes.  How about the  town businesses get together and create something great. To find out what people really want and how they want to shop. To find out what times people would like to shop.   And then ask people what the small shops need to do to get them use the little guys rather than the supermarket.

Ask questions. But most of all listen to the answers. If they say small shops are to too expensive do some price comparisons to show your customers.. Show the best value stuff in your town. Lots of small shops and markets sell lines cheaper than supermarkets. It’s just the supermarkets price certain items cheap (sometimes at a loss to themselves) so they can say we are cheapest. But not everything is price. Ask people if this is the main concern. You may be surprised. 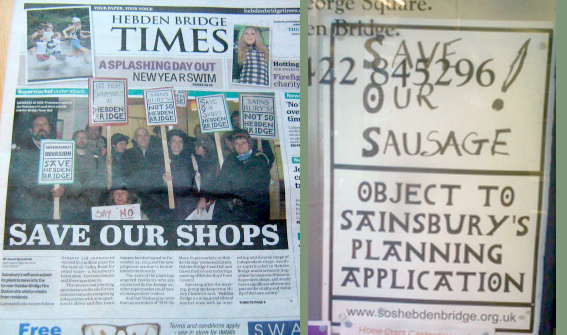 If they say its opening hours that cause them a problem do some late night opening between a few of the shops around you. Advertise it well. If it’s online shopping pull together for some deliveries. All of these things have been done individually but not the whole thing together.

If you want to fight supermarkets take a look at how they do it.   Because they spend a fortune on listening to people. Just steal all their knowledge. Add to this better service and all that great messages about how supporting local business helps your town and you may just be onto something.

Yes it will take lots of hard work, and people often say to  me “I’s okay for you because you don’t run a shop and we work long hours”, but so do I. I run a 1 man business which is way too busy, and I put aside at least 15 hours a week to run totally locally for free. If you want your business to succeed you need to work cleverer harder but most of all together. Coordinate stuff between you help each other out and share the load.

Supermarkets are pretty well at saturation in the UK.  The big four supermarkets , tesco, asda, sainsburys and morrisons  are now building small convenience shops. Because they realise people have changed shopping habits. They don’t do the huge Saturday shop most do small ‘top up shops’ regularly,  often after work.  The supermarkets are after your traditional customers! Don’t let them win!

Everyone is guilty of getting home and forgetting something for tea and it’s 6:30 and is only one choice. And this is where the supermarket wins each time. We’ve all done it even the most ardent local shopper. I myself hate it.

But if a person genuinely wants to support the local shops yet is working away, they have no option. Unless you give them one.

I saw a recent scheme in todmorden – www.marketdelivered.co.uk  A guy has set up a website where you can order food from the local market from all different stalls, he collects it and delivers to the customers house. He charges 15% to the retailer but how great is this?! A true alternative for busy workers who don’t want to use tesco on line. There’s loads of ideas and alternatives out there.

So to sum up. Why not get together with a few neighbouring shops. Go to the pub, throw some ideas about and see what sticks. You could come up with a genius idea you could share with everyone. But don’t take the threat of a new supermarket lying down.

Not SOS save our shops, but ROS – Rethink Our Shops. And you could be the first town to have an empty supermarket chain. And how great would that be!?

Or you could think I’m a self righteous git for writing this. but I still need to be able to buy stuff after 5!  Sorry.