Totally Locally is a campaign run in many towns across the UK and around the world (from France to Australia) and all those towns have their own Facebook pages. Tavistock is one of those towns. And when they shared one of our images, everything went a bit crazy…. 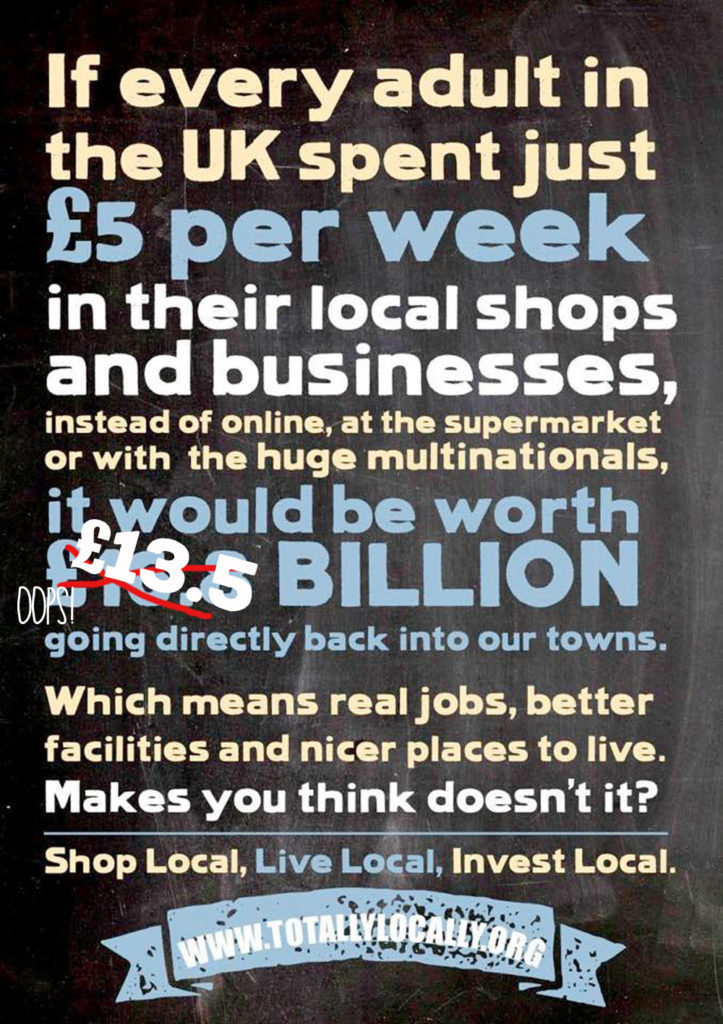 Rachel, who heads up Totally Locally Tavistock shared this image and bit of maths this week, just after the EU Referendum. And whether it has anything to do with this, we’ll never know, but the post was shared over and over.  Viewed 2.75 million times, and shared 33,000 times – in 3 days! And this time it really threw up some conversations.

There were lots of questions and comments from all over the country, and we’ve had loads of emails!

So I thought it best to answer the most common comments and questions like this:

YES – you are right – they don’t (no fake promises on sides of buses from us!).

The £5 message is a massive part of Totally Locally for each town, where we add up the adult population of the town, times it by 5, (£5) then times it by 52 (52 weeks of the year). And then you get the input into the local economy.

Simple……
Except that when you are in a big rush, you have a couple of minutes to knock up an image when someone requests it urgently for a presentation, and you are running late for a meeting….. So I went online and grabbed the WHOLE population of Britain – not the ADULT population, made the image up and posted it on facebook. Then I ran out to my meeting. And I got it wrong!  Sorry.

But we aren’t a big organisation. In fact there are 2 people in Totally Locally. And we don’t get paid. So we do this in our spare time, alongside full time jobs. No funding, nothing. No excuse I know, but I always had it in mind to re-do these figures when I realised they were wrong. And I didn’t, it just got lost in the pile of things to do!

What it SHOULD have said is “If Every Adult in The UK spent £5 per week in their local shops and businesses, instead of online or at the big supermarket, it would be worth £13.5 billion.

But as you see – it’s still a HUGE amount. And it still matters. My apologies for a stupid slip up. But it did help to get a conversation going!

So I’m happy to say I was wrong. But you must admit £13.5 billion going into local economies every year is huge.

COMMENT 2
I would do this, but the shops are always open when I’m at work, and closed when I can get to them.

We agree. It’s why I wrote this article a couple of years back: the-elephant-in-the-room 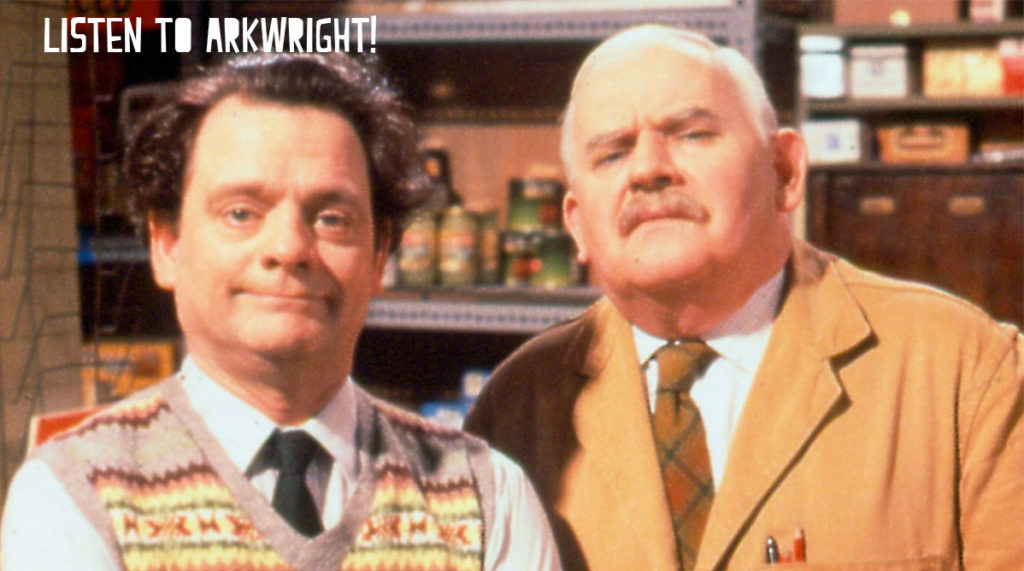 We aren’t here to make excuses for small shops. Small shops must change to survive. They must collaborate with their neighbours, they must look at their opening times and the must think in new ways.

Totally Locally is a platform to start those new ways of thinking. Its had massive results in fostering co working, and has seen dramatic drops in shop vacancy rates. So we agree. And the best examples we know of towns growing and thriving, have all tackled these things. Sunday openings in particular.

All the shops in our town are charity shops / coffee shops  / hairdressers / empty.

Precisely why we did this £5 message. There are lots of towns that still thrive and have a butcher, a baker, cobbler, clothes shop, hardware shop, sewing shop  and more (I live in one that has all these – and it certainly isn’t upmarket either). The people living in towns that still have these shops is who the message is targeted at.

If everyone makes a conscious effort to use their shops just a little bit each week, they will survive. And for those who have lost their shops – imagine if you could go back 10 years and do this – spend £5 per week. And if everyone did it with you? Those shops would be still there. I guess you would probably do it. Especially when you see the benefits it can bring to your town, even as far as better house prices (people now want to live in places with thriving high streets). Small things done by a lot of people make huge differences.

a) Small Shops are too expensive.
b) But if you did a big food shop in your local shop it would cost a lot more.

Some are, some aren’t. Some things sold are more expensive, some things aren’t. We did a price comparison a couple of years ago between local high street and supermarket. On some things supermarket came out cheapest, on others the high street did. Supermarkets are renowned for having everyday items like milk and white bread at very low prices, whilst other stuff is not cheap. It’s about  giving you the perception that everything in the place is cheap. Also at what cost? We’ve seen recently how some supermarkets are screwing the prices on milk to a point where farmers are getting less than it costs to produce it. It’s insane.

Over the years I’ve become keen on watching prices. And if you compare like for like, you nearly always get a better deal on the High Street.

Like for Like? I mean, for instance, sausages. Don’t compare a free range, great tasting, locally reared sausage from your butcher, with a value pack of sausages from the supermarket, which could have come from anywhere, and have lots of different meats from different animals in it with loads of preservatives. Compare it to the ‘Finest’ or ‘Best Of ‘ Range etc, even mid range. And you will see that local wins hands down in most of these cases. Same with bread, cakes, veg and more. You are getting true value.

Some local shops are rubbish and deserve to close down.

Yes they are, and yes they do. Our aim is to get people to look at what is there on their doorstep. If it’s good, and people are friendly and helpful – use it. If it is rubbish, don’t use it. We just want you to give it a chance.

If they don’t deserve your custom, don’t give it them. At least you tried!

COMMENT 6
So who will actually do this? I always go to our local butcher but shop at the supermarket for the rest.

If you shop at your local butcher then you are already doing it. It’s that simple.

Cool. Now try and find something that fits that locally sourced ethos and actually costs only a fiver….

Where shall we start? Literally hundreds of suggestions… All less than a fiver…locally baked bread, local meat from your butchers, veg from your grocers that’s grown within 15 miles, pet food, cup of coffee, bunch of flowers, you can get loads for a fiver… Why not try it and find out

COMMENT 8
Why did I see you in the supermarket the other day then?

I’ve had this thrown at me a few times. Lets be realistic. We live in a supermarket culture.

Lots of high street shops have closed, and many things supermarkets offer aren’t available any more. And I’m grateful for a supermarket open at 10pm when I need something desperate like medicine etc. We aren’t saying never use supermarkets or big chains. There’s nothing wrong with them.  We are just saying spend £5 per week to make the place you live nicer – with more employment, better high street and somewhere to wander on a weekend.

COMMENT 9
Supermarkets employ people too. They contribute to the local economy by paying wages.

They do. But the small businesses all tend to use other small, local businesses. And that is the big difference.

Part of the Totally Locally campaign called the Magic Tenner. If you spend £10 in a local shop it is worth up to £50 into the local economy. This is based on the New Economics Foundation data, which works on the circulating pound. Sounds a bit strange, but bear with me…….

Most shops use other local businesses. A local cafe will probably use a local bakery, local veg shop, local accountant, window cleaner, butcher, electrician…. the list is endless.

And take one of those – say the butcher. He will probably buy from a local farmer, use a local accountant, baker and more. It is what our towns and cities are built on. Strong local economies. And with each transaction made like this, more money goes into the local economy.

But when a big chain cafe or shop opens in your town, they DO employ local people, but the will have a central buying point, warehouse, accountant, shop fitter, coffee supplier, in fact almost everything will come from outside your town. So there is no benefit to other businesses there. PLUS, if a cafe or shop is owned by a local person the profits go to that person, not to some multi national shareholder group. And those local business owners tend to spend their money right back in their town. Because they understand how important it is. If the money leaves your town and goes to big shareholders or conglomerates, none of it is re-spent or reinvested in your towv. So when you buy local you support many other unseen businesses in your area.

We also say to local shops and businesses – ‘Do you use other local businesses?’ If they don’t , why should they expect people to support them, when they don’t practice what they preach. Ask them!

So thanks for reading my blog on my big mistake.

I hope you’ll forgive me, but in the end, I hope it has made you think a little, and it may encourage you to take a walk down your high street, maybe spend a fiver, strike up a conversation, and discover something you didn’t know was in your town.
Thanks for your time in reading this 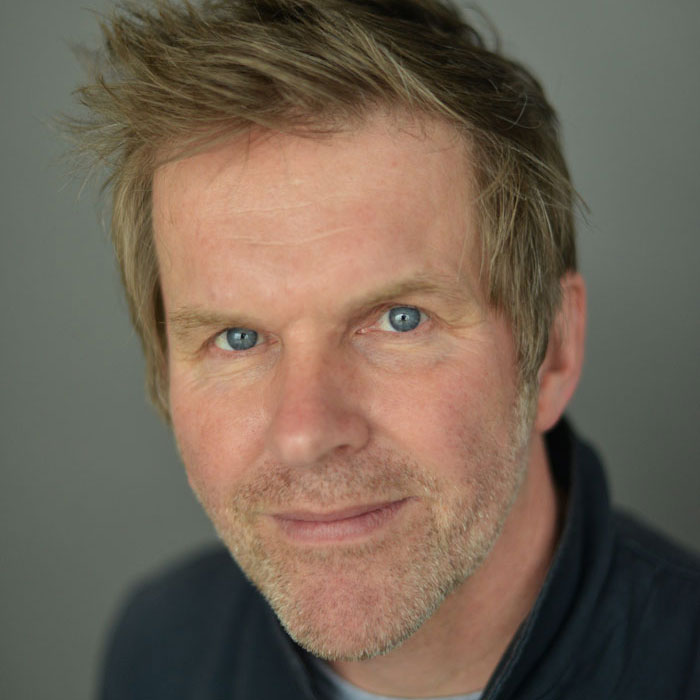